Exposing the Beauty in Black: A Review Of “Brown Skin Girl”

Exposing the Beauty in Black: A Review Of “Brown Skin Girl”

BY CHINELO EZE
25 AUGUST 2019 | 10:30 AM
It has been weeks since the release of “Brown skin girl” by Beyonce Knowles, Saint Jhn and Wizkid. Just like letting out endorphins to the black community, it is a well-received anthem that speaks of the beauty and glory of the black skin hence appreciating the black race and all that it brings: the dark melanin and the kinky hair, the thick thigh and broad hips to mention a few. Brown Skin Girl isn’t one of the very bubbly songs that make you spring quickly to your feet to bust some Michael Jackson dance moves. It especially sips rather quietly into the heart of a race that has been long taught to hate their skin and everything that being black entails. The love for the song, therefore, is heightened and reinforced by the black sentiments, social reconstruction and perception of the world.
The release of the song made a huge impact on the internet and social media. Its widespread sparked the worldwide trend of #blackskingirl, a challenge born by Beyonce also. Despite this positive reception, there was a twist on social media as to who the black skin girl is. The search for the identity of the “girl” may have been provoked into being because of a line in the song. 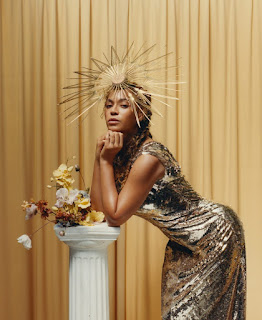 The particular line reads:
melanin too dark to throw her shade” (5th verse, 6th line) and another line that says “ but your skin, it glow like diamond”(8th verse, 4th line)
The above lines from the song clearly describe a really dark-skinned girl with a shiny glow hence the reference to Lupita in this line “Pretty like Lupita when the cameras close in” (5th verse, 3rd line).

One could easily see, in the lyrics of the song, that an acknowledgement is given to the “complexities of complexion” but it is more specific to a dark chocolate glowing skin. So this should end the brawl on the complexities of skin tone. The lyrics of the song is embedded in a message that brings about social awakening; that the black race ought to and should love their skin whose natural beauty belies power gifted to them by nature itself. 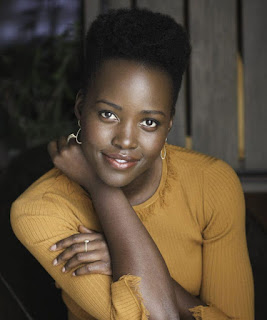 In light with the above, the first line of the song alerts the black girl to her beauty by poetically describing her thus: “your skin just like pearls”. The simile “like” is intentionally used to show comparison as to how precious the black skin is, just as pearls are deemed precious. It celebrates the pure dark melanin and calls on one to bask in the blackness of one’s skin, regardless of what anyone thinks. It also challenges one to continually grow in love with the black skin while conquering socio-political perceptions and stereotypes of racism. Black Skin Girl is “woke”.

With the event of the songs’ release, a thousand reactions were felt from prominent people. They more or less endorsed the song by their actions, comments and hashtags, thereby affirming the positive vibe of the song to spread love to the African community. Actors, actresses, sportsmen and women, musicians, and famous talk show host Oprah Winfrey reacted to the vibe of the song by calling it a resounding love letter to black women which invariably shows what the song means to her.

The song has since prompted some people to say they wished they had this song growing up as young girls, wishing they had some public affirmation to appreciate their uniqueness. This, simply meaning that to some it may seem that this kind of song that sings the praise of the African skin is the first of its kind.

It is definitely not when we remember India Arie’s “Brown Skin’ released in 2001. The disparity of impact and effect of the latest skin tone song lies hugely in the timing of these songs. Two distinct differences could be through the different eras in which the songs were sung. Beyonce, Wizkid and Saint Jhn version of the song are aired in an era where the social awakening/ wokeness of the black community are more awake and stronger than ever. Unlike the time of Arie’s “Brown Skin” which they were not as socially awake and empowered. Arie’s “Brown skin”, one sees a similarity of point of view to that of Beyonce, Wizkid and Saint Jhn’s. 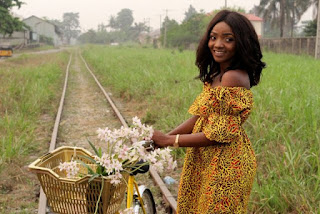 Simi. Photo: I am Simi

Notwithstanding all said, the most recent resonates more in its time which has added to the prowess of the song.
It is a song that urges the African woman to love what the world and society have termed an oddity; nappy/kinky hair, the rise of matriarchy, which are all suspicions embedded in the guise of sexism and race. It urges acceptance and believes in their humanity as every other being on earth despite the rainbow nature of the world.
It goes without saying that the anthem “Black Skin Girl” has keyed into the “black is beautiful movement” specifically the spirit of every black woman. It, therefore, paints the picture of a strong black-skinned woman taking the frontiers of the world, putting away all that hinders her every step. It suffices to say the song coming from our very own self acclaimed, Queen Bee and Wizkid is confirmed, a match made in heaven.
bright benue Brown skin girl exposing the beauty of black