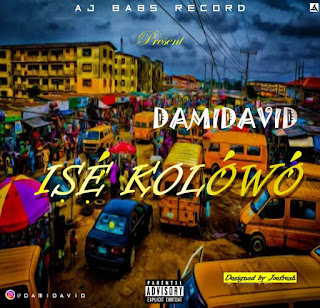 Aj Babs Record, Damidavid has served up another impressive single titled, “ISE KOLOWO”.
The new entry arrived after the success of his well-accepted record and visual for “POLONGO” in which the visual has gotten over a million views on YouTube.
The new single is a potential chart-topper and it’s sure to give you a good listen.
The acclaimed mayor of Lagos, DAMIDAVID dishes out a brand new record and it is titled “ISE KOLOWO“.
However, ‘ISE KOLOWO‘ serves as DAMIDAVID‘s output in 2019.
The record was produced by DENNYZEE, mixed and mastered by popular sound engineer, DENNYZEE.
With the release of this new record, you can tell that DAMIDAVID ‘ISE KOLOWO’. With Much words not needed, add it to your playlist asap.
Listen & Download “DAMIDAVID – ISE KOLOWO” below:-