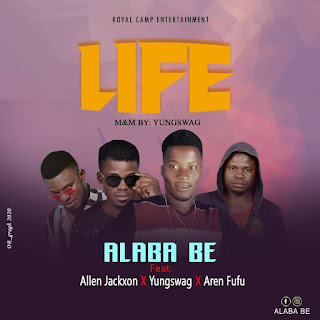 Nasarawa artist but Benin Edo based "Alaba be" is back to control the economy with a crazy song, swiping through three fanbases, featuring 3 artists on a song, namely "Allen Jackxon", "Yungswag", "Aren fufu", titled LIFE, produced by Yungswag himself.
Alaba be who was born 27th February 2002, is only 18 years but has the capabilities of getting big artists on a single track, Alaba be is signed to Royal Camp entertainment, download life by Alaba be, Allen jackxon, yungswag and Aren fufu and drop commenta.