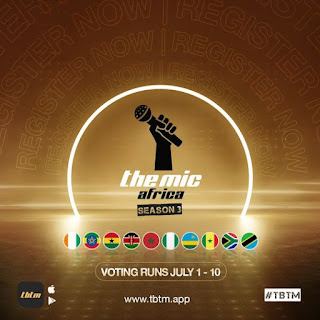 Calling the hottest talents across the continent to compete: rappers, singers, dancers, graffiti artists, and DJs

On the heels of winning three more Telly awards for Season 2, music competition and docu-series The Mic: Africa, announces Season 3. With Gold, Silver and Bronze Telly Award wins for Season 2 and Gold and Silver wins for Season 1, Season 3 is expected to surpass all expectations.

The Telly Awards is the premiere award honoring video and television across all screens and established The Mic Africa as a winner, alongside the biggest companies in entertainment.

Harvard educated and Hollywood star Derrick N. Ashong, “DNA,” and his team have built a Digital Media platform, Take Back The Mic (TBTM), that powered the launch of the first music competition format born in Africa for export around the world.

This season, registration for The Mic: Africa is open to talent from 10 African countries:

“We are so excited to open up this year’s registration. Season 1 saw Fecko from Nigeria, Season 2, it was YEYO, aka “The Miracle Child,” who took home the golden mic.

"With The Mic: Africa, our goal at TBTM Studios is to showcase and lift the amazing artists and filmmakers we discover on the TBTM platform to global recognition and prominence. There is so much artistic excellence emerging from the African continent. We plan to work with these talents and other emerging stars for years to come in establishing Africa as a hub for the best in Music, Media & Technology, while expanding our brand to other regions and continents, as well,” says Ashong.

Here are the Requirements to enter:

Entrants will be required to submit the following on the registration page:

4: A description of what Hip Hop means to the artist/group

Once registered, artists can add their uploaded videos and audio to the campaign in the app for fans to vote on.

Fans will vote for their favorites in the TBTM app from July 1st - 10th.

or the Apple Store or use the Web App to create a free user profile.

Publicity for The Mic: Africa is led by Desiree Peterkin Bell of the Award Winning global PR team at DPBell & Associates who has partnered with Aflik TV

Their flagship program, the interactive talent competition and docu-series, The Mic, has earned 2 Emmy nods, 5 Telly Awards (2 Gold, 2 Silver and one Bronze) opposite Netflix, HBO and Disney+, and a Murex D’Or Award, as well as a billion media impressions worldwide and 5 Times Square billboards in New York City. TBTM Studios has just opened its Dubai office, adding to its presence in Hollywood, Buenos Aires, and Mauritius, East Africa.